The goal of the study was to assess the perceptions and experiences of the civil servants working in central administration with regard to the level of corruption, forms of corruption, transparency of the decision-making process and the impact of these phenomena on the career development practices among men and women.

The analysis was based completely on the methodology assessment of corruption risks and vulnerabilities in public service in relation to gender equality developed by UNDP. There were undertaken sociological quantitative and qualitative studies, being applied the following research techniques: questionnaires, in-depth interviews, focus-group discussions and statistical documentation. The target group included civil servants of the State Chancellery of the Republic of Moldova, Ministry of Labor, Social Protection and Family and Ministry of Youth and Sports of the Republic of Moldova.

The study identified the main forms of corruption present in the central public administration and it has determined the way in which these forms influence both women career advancement and career affirmation. In addition, the study assessed the civil servants’ knowledge regarding the corruption phenomenon and mechanism for disclosure of corruption cases identified in the CPA.

The major conclusions of the study are as follows: 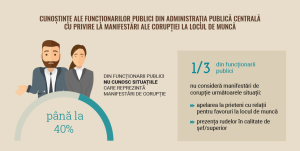 The above findings make it possible for us to conclude that the period of professional self-actualization for women in the CPA is much longer than for men because of social barriers (gender stereotypes), family obligations and roles, as well as low level of involvement in various career advancement opportunities. For women it is much more difficult to hold higher management positions than for men, which contributes to rapid and continuous advancement of men, who in turn more frequently get involved in corruption activities, foster, and promote male employees. Thus, corruption indirectly affects women’s career in combination with the social, family and situational factors.

The study contributed to the development of the specific recommendations for gender consideration related to corruption in order to ensure equal access to career advancement of women in the CPA structures.

The study was carried out in November 2015 – February 2016 and was a collaborative effort of UNDP Global Anti-Corruption Initiative (GAIN) based in New York, UNDP Regional Hub for Europe and the CIS based in Istanbul, and United Nations Development Programme (UNDP) in Moldova in the framework of the project “Strengthening the Corruption Prevention and Analysis Functions of the National Anti- Corruption Center”, implemented with the financial support of the Norwegian Ministry of Foreign Affairs.