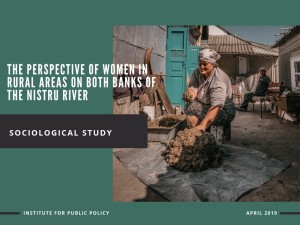 Globally, women are considered to be one of the vulnerable groups although their contribution to the development of societies is much higher than it would seem. The vulnerability of rural women is higher, and is explained by objective factors of the environment, the conditions under which they live, but also by factors of social nature.

In the Republic of Moldova, women in rural areas represent nearly 30% of the total country’s population, and 51% of the resident population in rural areas, and among the main factors of their vulnerability can be listed both economic and social ones. Unemployment and income gap between women and men are the main economic factors which influence the situation of women and cause a number of gender-specific issues. Among the social factors can be mentioned: stereotypes, violence in the family, standards accepted by the society, traditionalism existing on the distribution of roles in the family and in the society between women and men, etc. The persistence in society of discriminatory attitudes towards women, confirmed by the research conducted in the field, the stereotypes in Moldovan society according to which the man is the head of the family and the woman is assigned a series of household responsibilities, including caring for and educating children. Living conditions are worse in villages compared to cities, impacting the situation of women in rural areas. At the same time, reduced access to facilities, poor quality of basic services, lack of employment opportunities, of using knowledge and skills drive migration from rural areas, including women, which determines certain consequences to the family environment beyond the beneficial financial aspects.

The socio-economic potential, in general, is in direct correlation with the level of education, the state of health of the population, the community in which it lives. The deterioration of social capital in the rural areas of Moldova leaves its marks on rural women too. Analysing this issue in the light of the studies, it is noticed that the level of education of women from rural localities on the right bank of Nistru River is much more reduced in relation to women in cities. The same trends are attested in the communities from the left bank. Only 46.4 % of the active women in rural areas have higher education, secondary specialized or secondary vocational education and in recent years their weight is steadily decreasing.

A particular problem is the situation of women from disadvantaged groups, especially women with disabilities, mothers with many children, elderly women and the representatives of certain minorities (ethnic, religious, etc.). In the case of these social groups both quality of life and participation in community life are more precarious compared with the group of women in rural areas as a whole. Social stigma, marginalization, poverty, practically non-existent access to many services and opportunities produce double disadvantages to these social categories.

Another important issue for women in rural areas is access to medical services. Official statistics on both banks of the Nistru River shows that access to health services of women in rural areas is lower in comparison with the women from the cities. At the same time about 1/5 of the rural women appreciate their health status as bad or very bad compared to 14.5% of the women from urban areas (medical condition of women on the right bank of the Nistru River) (the state of women’s health of the right bank of the Nistru River). Such alarming data highlights the issue of the women’s health insecurity in villages who, due to informal activities or unremunerated work in agriculture, are not medically insured in addition to the fact that purchasing health insurance policy is still not popular among the rural population.

The lack of opportunities for socialization and realization of potential, through public, cultural activities, etc. worsen the quality of life of women in the villages on both banks of the Nistru River. The outbreak of the Transnistrian conflict had evidently affected the lives of women in the Republic of Moldova, but failure to resolve it over the years maintains a number of latent or unresolved problems, as well as unknown or ignored ones, on both sides of the River, alike.

The analysis of the aforementioned problems has determined the need for a comprehensive analysis of the prospects of rural women on both sides of the River. The comparative approach of the different social aspects investigated, allowed us to highlight the trends of development and affirmation of women who live on right and left banks of the Nistru River. The researched issues are addressed systemically, focusing on the interconnection between areas, and the application of qualitative and quantitative methods will allow the development of social and policy actions and initiatives, based on concrete data.